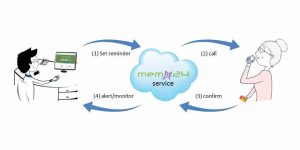 Memo24 reminder system helps with cognitive diseases.  Alzheimer’s and other cognitive diseases are now one of the fastest growing threat in the world. By 2050, Alzheimer’s will affect 1 in 85 people globally. Another gloomy statistic is that in the USA alone. There are 125,000 yearly deaths from the improper taking of their medications. Forgetfulness or taking the wrong dosage has become a big problem. Especially with the senior community in particular.

Memo24.net reminder system started off to tackle this problem in our growing elderly population.
Memo24 reminder system is a voice reminder and alert system. Its intention is to medication intake compliance and support. The primary recipients for such reminders are the elderly. Carrying an extra electronic reminder device is not viable or practical solutions. Memo24 reminder system is non-intrusive and simple and easy to set up through the web dashboard. The service allows you to give a set schedule. Then, to automatically place a phone call and play a pre-recorded or typed message to the caller.

By improving medication support, we can avoid serious health complications. By improving patients’ independence and overall quality of life. And reduce healthcare systems’ costs due to medication non-compliance.
There are a few studies showing how effective medication reminders are when it comes to improving support. The published article came out in September 2012. And appeared in the Journal of the American Medical Informatics Association.

How did Memo24 reminder system start

The Memo24 reminder system started back 2013. My mother-in-law found out she has a diagnosis of Alzheimer’s. And started to forget to take her daily medication. She lives 300 miles away from us, and I needed to find a way to help her remember her daily pills. Electronic pillboxes and alarms were not an alternative. They were too intimidating for my mother-in-law to learn how to use them.
The solution was to use something she was already familiar with: her landline phone. That’s how I came out with the idea of Memo24 reminder system. A service that would at a given hour place a call on my mother-in-law’s landline phone. And play a pre-recorded message to her. My wife pre-recorded the messages and set up the reminders using the online dashboard. She was also getting an SOS text alert every time her mum did not pick up after all 3 call attempts. My mother-in-law thus became the first Memo24 service recipient.

This was a massive success! My mother-in-law was now rarely missing her daily pills. And my wife and I regained some “peace of mind” knowing that there was a system reminding her. And even alerting us in case she did not pick up the phone.
That is when I thought that this simple and yet effective solution could help other people who are in a similar situation. And decided to make Memo24 reminder system available to the public. Today, Memo24 reminder system is for everyone to use and is accessible via the website www.memo24.net. It is being used by people all over the world. This system is in over 180 countries.
However, Memo24 reminder system is a not a substitute for the caregivers. And the care and love they provide to their loved ones, but it can help make our lives a little easier and healthier. Our mission is ultimately to help people live better and longer at home and ease their lives and the lives of those around them.

My thoughts on Memo24 reminder system

I have cared for thousands of patients and family members over the years.  While in business, I had to personally call my clients to remind them of all sorts of things.  Memo24 reminder system is very easy to use.  Their website will also allow you to try before you commit.  I have tried it myself and now use it to personally remind my daughter, and mother-in-law of many, many things, it makes my life easier. Also, check out this post on safety.

For more information or help with caregiving, you can get a free consultation from me.

This site uses Akismet to reduce spam. Learn how your comment data is processed. I’m a caregiving expert and adviser with 25 + years of experience who can help with the many problems facing today’s home caregiving. I’ve dedicated my life to working in the healthcare field specifically with caregiving.

Translate »
We use cookies to ensure that we give you the best experience on our website. If you continue to use this site we will assume that you are happy with it.OKPrivacy policy